Home » Gynaecological Care » Fibroids
Fibroids are benign growths of the muscle that makes up the womb. They are very common and may be present in up to 40% of women in London! In at least half of these women fibroids will not cause any symptoms and do NOT require treatment.

It is still not known what causes fibroids to form but it is likely to be a combination of genetic and environmental factors.

Symptoms typically include heavy periods and pressure symptoms. In some cases fibroids may be implicated in pregnancy or fertility problems.

Symptoms and treatment options depend on the position, number and size of fibroids.

Submucosal fibroids: these are fibroids that project into the cavity of the womb and are particularly associated with heavy periods and miscarriage or difficulty conceiving.

Intramural fibroids: these fibroids are deep in the muscular wall of the womb and may be associated with heavy bleeding or pressure symptoms.

Subserosal and serosal fibroids: the serosa is the surface of the womb and these types of fibroids are just below or on the surface respectively and are most likely to cause pressure symptoms.

Pedunculated fibroids: these fibroids are attached to the surface of the womb by a stalk and can cause pain (if they twist on their stalk) and/or pressure symptoms.

Extra-uterine fibroids: rarely fibroids may be in other sites within the pelvis without any attachment to the womb

Fibroids may be diagnosed when you are examined by a doctor or typically visualised by ultrasound scan. In some cases it may be helpful to arrange an MRI scan which can give additional information when trying to decide the most appropriate treatment option.

Small fibroids that are not causing symptoms should not be treated but can be monitored by ultrasound scan or change in symptoms to ensure that they are not growing rapidly. In women with heavy periods simple drug treatments such as the contraceptive pill or the Mirena may improve symptoms but will not influence the size of the fibroids (although there is some evidence that the Mirena may slow growth). Although there are drugs that can shrink fibroids (called GnRH analogues eg zoladex) this is only a temporary effect as treatment is limited by significant side-effects and following therapy the fibroids rapidly return to pre-treatment size.

Where medical treatment has failed, is inappropriate or with larger fibroids other options exist.

Surgery – the major advantage of surgical approaches is that the fibroids are actually physically removed.

1. Hysteroscopic resection – this is suitable for submucus (SM) fibroids.

Where 50% or more of a SM fibroid is within the cavity of the womb it can be treated using keyhole surgery. A telescope is passed through the vagina and neck of the womb and allows inspection of the cavity (this is called a hysteroscopy). A wire loop is then used to cut the fibroid out by removing small strips at a time (resection). This has shown to be effective at improving heavy periods. Removal of these type of fibroids is also important in women with difficulty conceiving or a history of miscarriage.

Fortunately this is a simple treatment carried out under a short general anaesthetic and no incisions are necessary for this kind of surgery. Patients are able to go home the same day and return to work very rapidly (usually 24 hours after anaesthetic).

2. Laparoscopic myomectomy – for all other types of fibroids.

Myomectomy means removal of fibroids. Due to advances in surgical instruments and techniques it is now possible for many women who would otherwise have had traditional ‘open’ surgery (via a bikini line or vertical, up and down incision) to now be treated using keyhole surgery. Laparoscopy involves passing a telescope through the belly button in order to see inside the pelvis. Additional instruments are then introduced through very small incisions in order to complete the surgery. This keyhole approach has a number of advantages including faster recovery and less scarring. A careful assessment is critical to identify who can have this kind of surgery. Key factors include the exact number, size and position of the fibroids as well as the overall mobility of the womb.

Most patients will be able to go home the day after surgery but should plan to take two weeks off work.

Fibroid dissected from uterus in foreground

In women with a large number of fibroids laparoscopic surgery may not be possible and traditional surgery will be more appropriate. Usually this can be performed by using a bikini line incision. Patients normally stay in hospital 4-5 days and need six to eight weeks off work. 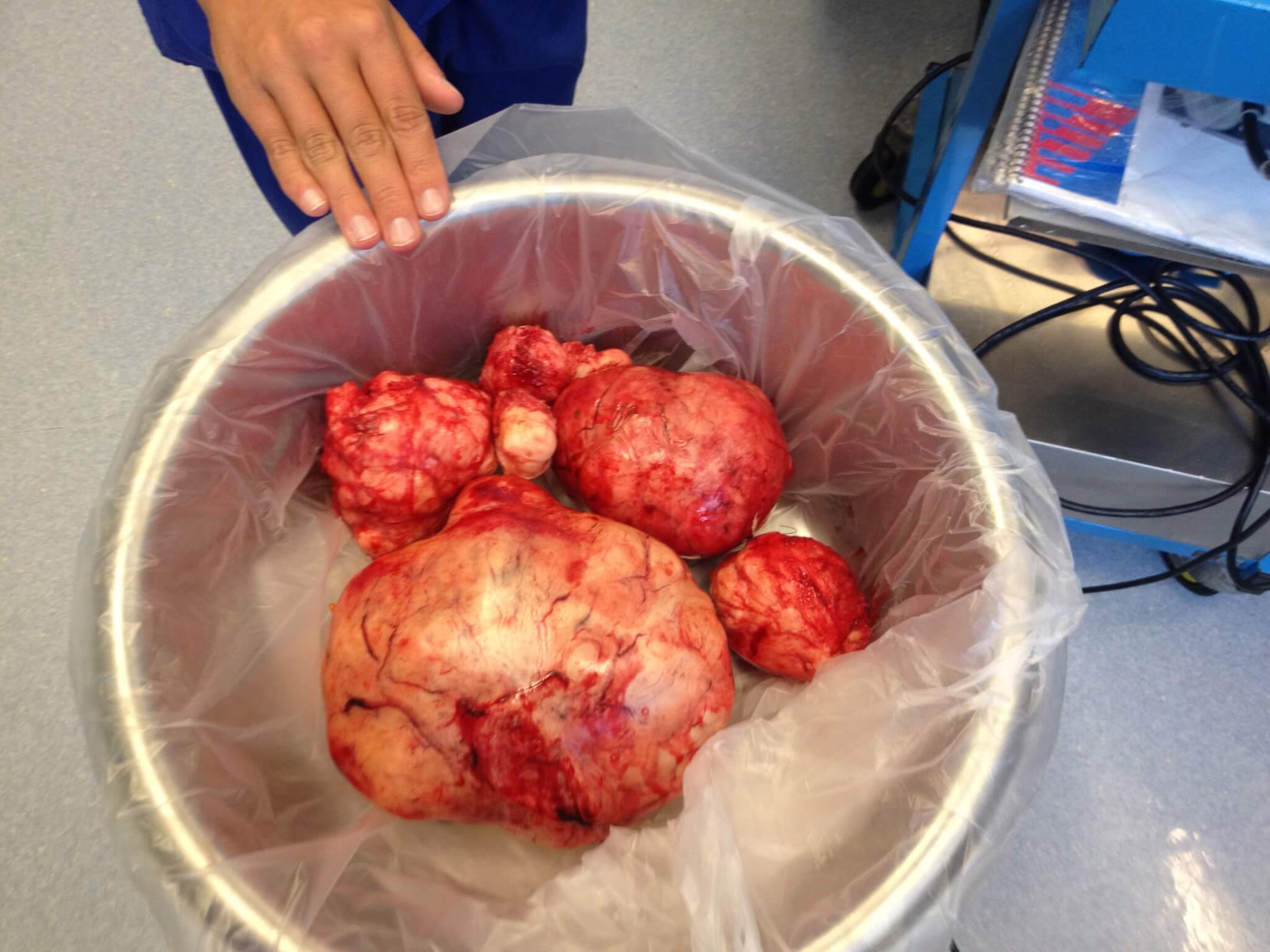 In women with fibroids who have completed their family and where other treatments are unsuitable, hysterectomy (complete removal of the womb including the fibroids) may be considered. Whilst this is a big decision for many women the advantage of hysterectomy is that it is a definitive procedure and guarantee of cure with no risk of recurrence. Whilst hysterectomy is clearly a major operation, paradoxically removal of the entire womb is associated with less surgical risks than myomectomy. There is no doubt that even with large fibroids the majority of women who need or want hysterectomy should be able to have a laparoscopic approach which is clearly associated with quicker recovery compared to open surgery. (see below for further information about laparoscopic hysterectomy.

Risks specific to laparoscopic and open myomectomy include post-operative adhesions (internal scarring) that can cause problems in the future, recurrence of fibroids over time, the potential need for Caesarean Section delivery in future pregnancies and the very small risk of hysterectomy. The actual risk will depend on the type of surgery required as well as other features that vary from patient to patient.

Uterine artery embolisation allows treatment of all fibroids in the womb using minimally invasive techniques without the need for surgical scars. A fine catheter is introduced into the arterial blood supply to the womb via the femoral artery (the main artery in the groin). A dye is passed down the catheter to confirm that it is correctly sited in the uterine artery – the main blood supply to the womb and therefore the fibroids. At this point small PVA particles are passed down the catheter and lodge in the uterine artery and also the smaller vessels that feed the fibroids themselves. Ultimately blood flow within these vessels stops and the oxygen supply to the fibroids is massively reduced. As a result many cells within the fibroids die and this leads to shrinkage in individual fibroid size and the overall volume of the womb. Typically overall shrinkage is between 30-50% which in many patients will lead to significant improvement in symptoms.

Clearly whilst the potential to treat all fibroids within the womb with a single treatment without surgical scars appears to be a very attractive option this treatment is not suitable for all women. Treatment can affect ovarian function (which in some cases may lead to premature menopause or reduced fertility) and there may be other fertility and miscarriage implications. Other risks include post-procedure pain, infection and in 1% of cases hysterectomy.

Sound is a form of energy and as with other energy sources can create heat. By increasing the intensity of the energy and ‘focussing’ the ultrasound to very precise areas the resulting heat production can be used to cause very accurate tissue death within targeted fibroids. As with UAE this results in fibroid shrinkage and potentially symptom improvement. Unfortunately this treatment is not appropriate for multiple fibroids and may not be as effective for pressure symptoms as other treatments. As this technique has been developed relatively recently it is more difficult to be certain about the long-term effect of this treatment although results so far have been reassuring.

Clinics are three times a week and Gail will help you arrange a time to see Mr Miskry and if necessary a scan on the same day.

If you are pregnant, you can expect to have a number of routine tests and appointments and you can find out more about the schedule of care here.

Appointments can be arranged by phone or email.

What our patients say about us

thank you so much for the fantastic care both before, during and after Alice’s birth…we felt in extremely safe and capable hands at the time of her delivery, which was a huge relief. Many, many thanks for your skill and dedication

thank you for your care, advice and skilful surgery

thank you for all of your support, patience, good humour and, above all, exceptional knowledge and skill during the pregnancies and births of our children

a heartfelt thank you for everything you’ve done…and delivering our precious baby safely. We found you to be extremely professional, caring and reassuring at an extremely difficult time for us

this was a very difficult time for us, often filled with anxiety and worry and we could not have wished for a better obstetrician to guide us through this

I couldn’t have asked for a better surgeon

thank you so much! From my first appointment with you to the last you filled me with confidence and made me feel at ease

These are some of our most commonly asked questions, but you can see all of them here

Do I need a GP referral for private treatment?

No. However if you have private medical insurance please check with your insurer as they may require a GP referral in order to provide cover.

Where does Mr Miskry see patients?

All clinics are held at 148 Harley Street.

Where does Mr Miskry perform operations?

If I have a private consultation will this alter my care in the NHS?

No. Your treatment or position on an NHS waiting list will not be affected by having had a private consultation/surgery.

Are tests included in my consultation fee?

Any tests Mr Miskry recommends as part of your care are payable directly to the clinic/lab/hospital where they are carried out and are not part of our fees.